Blog post by Micah Fisher, Learning from Disasters
On Wednesday we held several meetings with key Disaster Management institutions based in Hawaii. This included the NOAA Inouye Regional Center at Ford Island, the National Disaster Preparedness Training Center (NDPTC), and the Department of Emergency Management. 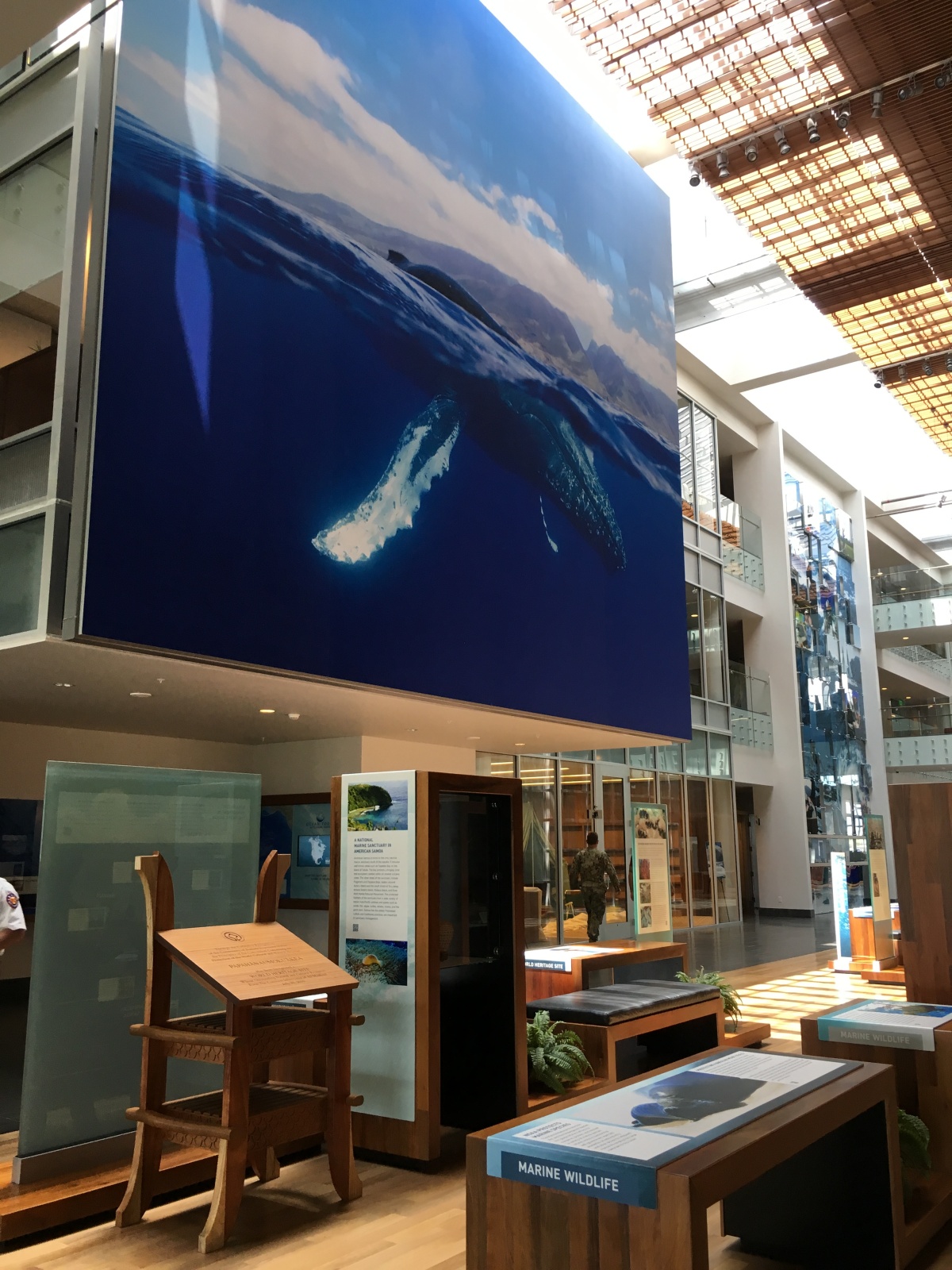 At NOAA’s Inouye Regional Center, Bill Thomas (Senior Advisor on Islands, Indigenous, and International Issues) described the unique setting and siting of their Center. Facility construction bridges two historic World War II hangars but the design also includes indigenous features of Hawaiian culture, and also boasts LEED certification. Bill escorted us to meetings with the Pacific Tsunami Warning Center, and introduced us to the numerous offices housed in the facility, which range from ocean, atmospheric, meteorological, and outreach efforts.

We first visited the Pacific Tsunami Warning Center. Here’s Laura Kong and Derek Ampnir simulating a tsunami learning tool. This cross-section simulation shows the difference between waves created by weather — which forces energy along the surface of the ocean — as opposed to tsunamis that generate energy across the entire column of the ocean. As a result tsunami waves can compound much more energy and can travel further inland.

We also had the opportunity to try out other learning tools. This sand box is a topographical model which uses computer sensors to redraw contours. The model can also simulate rainfall when you hold your hand between the sand and the projector. This generates rainfall and can show how flood dynamics might work in a given watershed. The Head of the West Papua disaster management agency drew the outline of the northwestern part of the island of New Guinea. He simulated how rainfall occurred during the flash floods of Waisor, and the rector also redrew the unique geographical landscape of Wondama Bay.

Finally we also learned about the globe on a sphere, which is a complex simulation of numerous data source projections. We examined the recent triple threat of hurricanes in the United States, and watched the weather patterns as storms Harvey, Irma, and Jose flashed on the screen. We also looked at a diverse set of other simulations, including heat waves, shipping routes, and models from the Tohoku tsunami of 2011.

Leaving Ford Island, we drove past the USS Arizona Memorial and went downtown to the offices of NDPTC. The conversation shifted to training in its many different forms. Karl Kim shared with us about the various curriculum they have developed, the hundreds of counties that they have worked in, and the timeliness of such work in light of recent disasters in the United States. We also discussed the role of the University of Papua and departments of emergency management in developing training programs and outreach in West Papua province.

During the afternoon we made one final stop at the Office of Emergency Management. Their offices are located inside the Diamond Head Crater. Here we learned about the State’s plan in the event of disasters, especially the role of coordinating the command center. We also learned about the office’s plans to address the major hazards in Hawaii, including the lava flows on the island of Hawaii, earthquakes, tsunamis, and hurricanes. One more recent preparation focus is planning for a potential nuclear attack from North Korea. This has been in the news lately and they are simulating potential actions plans in the event of heightened security concerns. 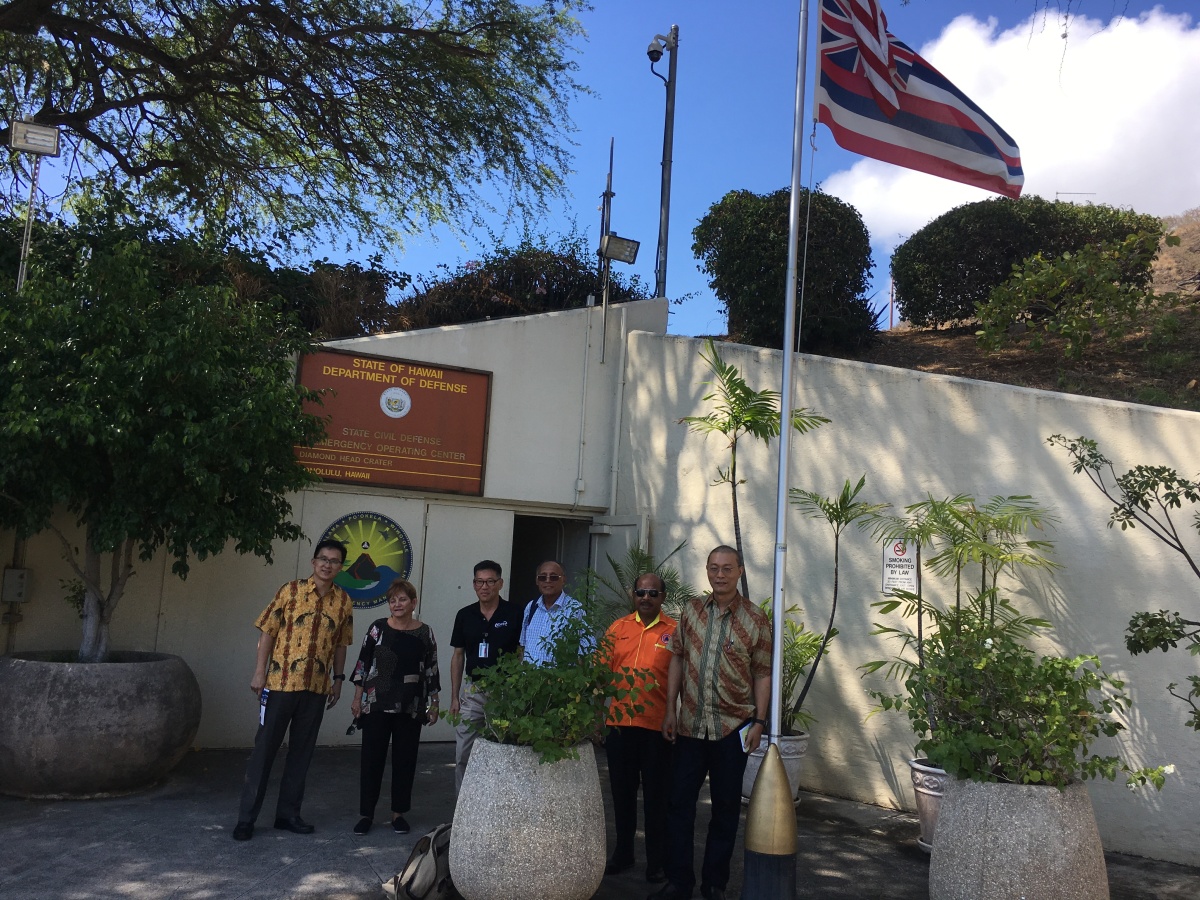 It was a full day. On Thursday we will travel to the North Shore to visit a collaborative research effort at Camp Mokuleia.